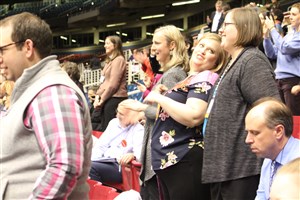 An environment of praise and elation one minute. The air seemingly sucked out of the room the next. That’s how I experienced Sunday afternoon at the special session of General Conference in St. Louis.

After a morning filled with engaging preaching from Bishop Ken Carter, president of the Council of Bishops, and a poignant report from the Commission on a Way Forward that included how the diverse group built relationships and maintained the dignity of all its members, the 864 delegates got down to business with a series of votes that prioritized the legislation before them.

Keep in mind that there are 78 petitions involved in all of the legislation for the special session, so associated petitions were bundled together, meaning delegates cast 24 votes of either “High Priority” or “Low Priority.” The plan from the Commission on a Way Forward that received the most high-priority votes would be the legislation to receive the focus of action by the delegates.

While votes were tallied, the amazing General Conference praise band led an energetic time of singing and dancing. Song after song led to louder and louder praises to God, with more and more people joining in on the movement to the music. It was a great way to spend a Sunday afternoon.

Then, the vote tallies came in.

The Wespath legislation that deals with how pensions can be most amicably dealt with if changes are made to the Book of Discipline settled at the top, with 518 delegates (or 63.6 percent) voting the petitions as a high priority. Second came the Traditional Plan, with 459 votes (55.6 percent).

That’s when I sensed the air flooding out of the room. What moments before had been a boisterous environment became eerily quiet.

I realize some people will see the Sunday’s vote as a victory. Others will say the vote means nothing. I think both extremes are incorrect.

First, the vote is an incremental victory. Because of the outcome, the Traditional Plan will be the baseline from which the work will begin Monday morning. That means legislation to amend it or substitute it will have to be adopted by a body of delegates that voted more than 55 percent in the affirmative that the legislation is important. That’s a big number, not insurmountable by any means, but it means swaying more than just a couple of votes here or there.

On the other hand, the vote is just that, incremental. The next two days will be filled with campaigning, amendments, amendments to the amendments and more posturing in an effort to craft legislation that meets goals by delegates who support the One Church Plan or other legislation. There was only a 56-vote difference between the Traditional and One Church plans. And the One Church Plan only fell short by 30 votes of achieving a majority (based on 864 delegates).

Translation: There is a lot of support for the One Church Plan as well.

Disaffiliation, in my mind, means we have a significant number of delegates who think the church is better off not existing than living together in disagreement on LGBTQ inclusion.

Monday will be a critical day. The Traditional Plan — which has known constitutional issues — will be the primary subject. I think it’s safe to say the tensions will be high, at least as high as the stakes.

My prayer will be, as it has been since the formation of the Commission on a Way Forward, is that the Holy Spirit will fill the room. And I pray that it will neither provide guidance toward a conservative approach nor a progressive approach.

Instead, I pray that God’s will shines through via the actions of what happens on the plenary floor.

I’ve heard many a pastor tell me the most vulnerable prayer we can offer is one we include in the Lord’s prayer: Thy will be done.

That’s my prayer for these next two days.

Todd Seifert is communications director for the Great Plains Conference of the United Methodist Church. He can be reached via phone at 785-414-4224, or via email at tseifert@greatplainsumc.org. Opinions expressed are the author's alone and do not necessarily reflect the views of the Great Plains Annual Conference or the United Methodist Church. Follow him on Twitter, @ToddSeifert.