In Layman's Terms: Some poignant moments on a difficult day 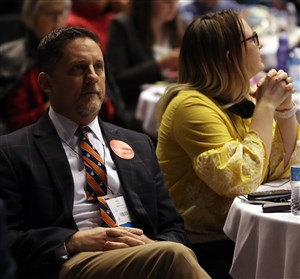 After the prioritization votes for the legislative committee portion of the special session of General Conference on Sunday, it probably wasn’t surprising to too many people that the Traditional Plan moved on to Monday’s plenary phase, and the One Church Plan failed to move on to that step.

The One Church Plan has an uphill battle, to be certain, but there is a way for delegates to debate the virtues of the plan recommended by a majority of bishops one more time. It comes via a minority report.

Rule 29 in the rules of order for the conference says if the chair receives a minority report for a failed petition signed by 10 people or 10 percent of the legislative committee membership — whichever is less — then one of those signees can offer up the petition as a substitute for the report from the committee.

In essence, the failed petition becomes the item to be act upon by the plenary body.

It’s a long shot, to be certain, but it does give at least some hope to One Church Plan supporters.

I know that this entire conference is all about politics, but I want to take just a few moments to talk about some poignant moments involving the Great Plains Conference delegation. Even if you don’t support the One Church Plan, you can be proud of the work done by your delegation.

For example, the Rev. Cheryl Jefferson Bell, a pastor at United Methodist Church of the Resurrection in Leawood, Kansas, stood in opposition to the Traditional Plan. Her 3-minute speech focused on telling the story of compassion and hopes for inclusivity for her denomination. She recalled the song “Where is the Love?” and asserted that Jesus noted people would know that He had been here because of the love the church would show for one another.

In my opinion, it’s difficult to show love if you don’t give people a seat at the table.

Or a voice. And that was the point of another poignant moment.

When another delegate made a motion to cast all remaining petitions aside, debate started about whether to toss out the Simple Plan, which would remove all restrictive language from the Book of Discipline, or to separate it out for debate while eliminating the remaining petitions.

When it looked like there was support to kill all remaining legislation, the Rev. Adam Hamilton, senior pastor at Church of the Resurrection, stepped to the microphone and pointed out that the General Conference had one opportunity left – at least this day — to allow a voice to the very people about which this special session was called: LGBTQ Christians.

Adam’s speech may have had an impact. When the vote came in, delegates who had so clearly voted traditional all day decided to allow for people to have a voice. The motion to kill all remaining legislation except for the Simple Plan passed overwhelmingly.

Now, the Simple Plan failed, and it certainly looks like some version of the Traditional Plan will pass before we adjourn Tuesday. But at least we heard a few speeches from people who too often are talked about but not talked with when it comes to something that we all should be able to count on as followers of Christ: the church.

I don’t care if you’re a traditionalist or a supporter of the One Church Plan. What I hope is that even if we still disagree on human sexuality, perhaps we can at least show some dignity to others who were created by the same God and who serve the same risen Savior.

Todd Seifert is communications director for the Great Plains Conference of the United Methodist Church. He can be reached via phone at 785-414-4224, or via email at tseifert@greatplainsumc.org. Opinions expressed are the author's alone and do not necessarily reflect the views of the Great Plains Annual Conference or the United Methodist Church. Follow him on Twitter, @ToddSeifert.