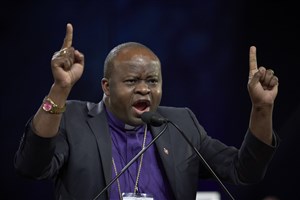 After the first day of the special session of General Conference — a day set aside for prayer and praise — I was struck that a unifying embrace of cultures from outside the United States also poses one of the larger challenges for The United Methodist Church.

That’s neither good nor bad. It just is what it is. I’m hoping we can turn it into an opportunity.

Let me attempt to explain.

Saturday’s prayer service included time to pray in the languages of European countries and Russia, at least one African continent dialect, Korean and, of course, English. Honestly, there likely were more, but issues with credentialing for conference communicators and photo duties kept me from paying super-close attention at times, particularly in the morning.

As delegates and guests sang in languages they did not know, and as they were led in prayer by bishops from nations other than the United States at times Saturday, I noted an abundant outbreak of smiles and overall positive feelings. This huge dome in St. Louis felt like it had shrunk to a more manageable sanctuary-like size. Folks enjoyed the opportunity to at least partially immerse themselves in another culture as they worshipped the God we all consider our Creator and the Savior of all humankind, Jesus Christ.


However, those same cultures we celebrated Saturday also reflect the challenges our denomination has starting Sunday and going through the end of the conference Tuesday. Those challenges are not the fault of the people who live within those cultures. It’s the simple reality of differences in our societies and the laws that govern them. It’s a matter of balancing respect for other cultures verses changes in U.S. culture.

By almost any measure, the United States has turned a corner — whether we agree with it or not — in its acceptance of same-gender marriage. Many polls put the number above 50 percent — some considerably higher than that — of Americans who support the right of same-gender couples to marry. Those are encouraging numbers for our LGBTQ sisters and brothers who are seeking full inclusion in the church.

Despite those changes in the United States, however, the numbers don’t appear to be moving as rapidly in that direction in parts of Africa and in the Philippines. While in parts of Europe, same-gender marriage has been a reality for more than a decade.

Too often, we in the United States take for granted the freedoms we have, so we lack understanding of why people from elsewhere make the decisions they do. On the other hand, it’s easy to jump to conclusions that African delegates are going to vote unanimously on the conservative side. That may not be the case, either.

See why this is complicated?

And I used to think whips in Congress face challenges counting votes.

I think any speculation on how any votes will go is pointless. There are simply too many variables. Some delegates support removing restrictive language from the Book of Discipline, and some support tightening accountability. They all have to figure out the delicate balance — within their own world views — between their respect for cultures in other countries with their desires to move the denomination, be it in a more progressive or more conservative direction.

And it all — or at least mostly — comes down to majority votes.

I think the key point for people who have not been following the LGBTQ discussion is that while we United Methodists in the United States are wrestling with restrictive language, it won’t be our delegates alone who will make the decision.

Being part of a worldwide connection of churches has tremendous benefits. But those benefits come with some interesting challenges.
May we, somehow, turn those challenges into real opportunities.