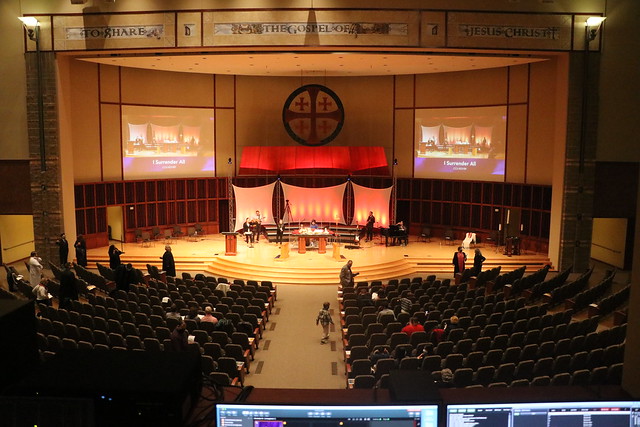 It was neither the usual time of year nor the place that 29 clergy were expecting to be commissioned and ordained in the Great Plains Conference, but there were nonetheless celebrations Oct. 3 at Omaha St. Andrew’s United Methodist Church. 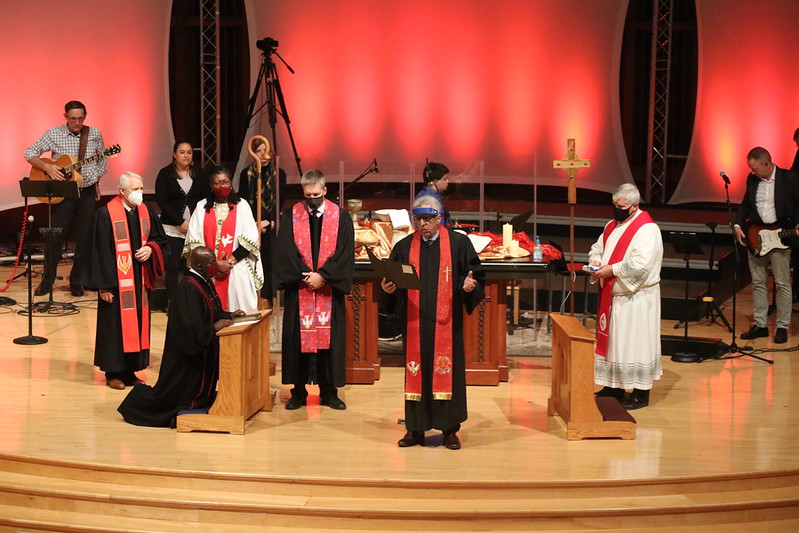 Here are those celebrated in ceremonies on Oct. 2:

Rachel Rigdon was ordained a full deacon by Bishop Mike Lowry in the Central Texas Conference. Rigdon serves as a chaplain at a pediatric hospital in Fort Worth and could not travel to Nebraska for the Great Plains ceremony.

The services, which usually are combined, were to have taken place May 29 during the Great Plains Annual Conference session at Stormont-Vail Events Center in Topeka, but were postponed because of the pandemic and health and crowd-size concerns.

In his sermon during the ordination service, Bishop Ruben Saenz Jr. said he wanted to have the human touch for the rite of ministry.

“I didn’t want to do this virtually,” the bishop said. “There’s something sacred about ordaining someone by the laying-on of hands.”

Ordinands were limited in the number of guests they could invite, and all seating was by invitation only after having their temperature checked entering the church. Seating was in alternate rows of the St. Andrew’s sanctuary, with several seats in between parties. Those being ordained took their places in alternating kneelers, with each kneeler cleaned and disinfected while the other was being used. Those being ordained and commissioned kept a 6-foot distance in line, and all were wearing masks. Bishop Saenz wore a transparent face shield during the times he interacted with provisional members and ordinands during the ceremonies.

The Rev. Melinda Harwood, pastor of Valley Falls-Coal Creek-Ozawkie UMCs in Kansas and leader of the sessions worship team, said plans were completely changed several times since the onset of the pandemic in mid-March.

Like Bishop Saenz, Harwood said having in-person ceremonies was essential.

“It’s kind of hard to do that on a webinar,” she said. Canceling or postponing “was on the table, but Bishop Saenz really has a heart for the rituals and symbols. These are the things that really speak to us in layers of ourselves that we aren’t really aware of.”

Harwood praised the staff of St. Andrew’s UMC, which opened its new sanctuary in 2018.

“St. Andrew’s Church has been the easiest setup that I’ve experienced,” she said. “Normally we have to make an arena look like a church, but we do have a church, and it’s such a beautiful, sacred space. Pulling it together has been much easier.”

Volunteers from Olathe Aldersgate UMC made red masks for those being ordained this year, to match the stoles that are traditionally crafted by that church.

Gregory Reffner, a Wichita native, returned to the Great Plains with his wife for the commissioning service. He began his first pastorate at a United Methodist Church in Bremerton, Washington, this summer.

The Pacific Northwest Conference did have a clergy session to vote on provisional members, Reffner said, but have postponed all of the services until next year.

“I’m really glad that Great Plains decided to have this in person. We traveled out for three days and driving all the way back. We’ll take some time off and breathe deeply a little bit.”

More than 300 people watched each of the services online, either through Facebook Live or the Great Plains Conference’s website.

Reffner said the only regret was that more of his family and friends couldn’t be at the ceremony.

“I’m grateful to share this holy moment in person,” he said. “The only thing I’m able to lament about being in this space is to not share it with my clergy colleagues and friends in ministry who have walked the walk with me over the years, identified my calls, supported me, helped me discern. It would be great to have my family here, of course, but there will be so many folks watching the livestream, which will be special as well.”

Following the commissioning ceremony, the 14 provisional elders and two provisional deacons were greeted with thunderous applause in the church’s lobby by their counterparts who would be ordained that afternoon. Four hours later, the elders and deacons returned the favor for the dozen newly ordained elders.

Among the new elders was the Rev. Kayla Mangrich, pastor of Pleasanton-Haven’s Chapel UMCs in Nebraska.

Mangrich said she was anticipating this day since her interviews last year.

“It’s been completely different from what I expected, but the conference did an amazing job to make this happen for us and make it a special day,” she said.

Despite the different location and different month on the calendar, Mangrich said the ceremony was better than she had hoped.

“Goodness Lord, yes. Can you not tell I’ve been crying?” she said. “It’s hard to describe the emotion and the feelings and the moments and the nerves and the anticipation. It’s all there.”